The Queen’s Award for Voluntary Service 2023

Do you know a voluntary group that deserves recognition for the work it does?  Why not consider nominating it for a national award?

Terry Hephrun, Chair of the Lancashire Panel for the Queen’s Award for Voluntary Service (QAVS) said “In 2002, in celebration of Her Majesty’s Golden Jubilee, The Queen’s Golden Jubilee Award for Voluntary Service by Groups in the Community was established. Its purpose is to recognise exceptional groups of individuals who are giving their time freely for the benefit of others and are making a real difference in the communities they serve.  It is the highest honour that can be bestowed upon groups of this kind and is equivalent in status to the MBE.

“As such, The Queen’s Award not only serves to provide recognition of volunteer groups, but also demonstrates the high respect in which volunteering is held.  We all know the value of voluntary effort to support communities not least in the difficult circumstances we are continuing to face in 2022.  In this Platinum Jubilee year, it seems appropriate to look to encourage a good number of nominations for Lancashire.

“Groups must be nominated for the Award – self nomination is not permitted. A group (three or more people) can be nominated if it is based in the UK, the Channel Islands and the Isle of Man. The group has to have been volunteering for the benefit of people in the UK or overseas for at least three years and more than half its members must be volunteers who have the right of residence in the UK. It must provide a specific local benefit and Groups solely concerned with fundraising for charitable purposes or operating solely for the benefit of animals are not eligible.”

The QAVS Team at the Department for Digital, Culture, Media and Sport administers the Award and will happily help with any queries. You can contact them at queensaward@dcms.gov.uk or 0207 271 6206

Further details on entrance criteria and the nomination process (which is a fairly straightforward online system) are available here.

Nominations for the 2023 awards can now be made and the closing date is 15 September 2022. 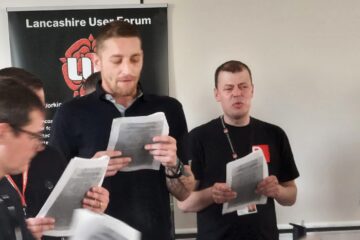 Community CVS’ Miffy Clegg and Marselle Davies were among those present at the superb Lancashire User Forum (LUF) event at The Woodnook Centre in Accrington on Wednesday 18th May. As part of our role within Read more…

Community CVS’ Miffy Clegg will be holding a drop in session at Café Hub in Darwen every Wednesday from 11am to 2pm (excluding next Wednesday, 18th May). Miffy will be there to enable people to Read more…